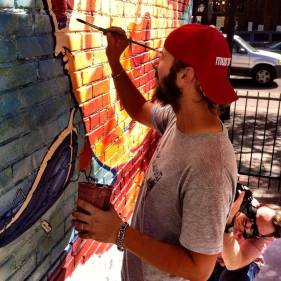 I am a Romanian artist born in Hunedoara/Transylvania and an alumnus of the school of Arts in Cluj-Napoca/Transylvania and Cairo University in Egypt.  I have pursued my artistic vision and over time, developed a specific and unique style:  a juxtaposition of color and line. I moved in 2006 to the United States, entering into Chicago shortly after where I was able to participate in two Around the Coyote annual art events as well as other gallery art shows in the city.  I have been living in Dallas since 2008, and have done work to help beautify the Deep Ellum neighborhood including the Shed Mural at the Deep Ellum Urban Gardens, the Pillars Park and Art Park, as well as several of the art covered planter boxes in the area.  I have a 40′ wide mural called “Deep Ellum Janus” on the wall of the Armoury DE at 2714 Elm St.  I participate in many local art festivals, live art events, and gallery art shows.  My wife and I were part of the international Cool Globes project in its first year in Chicago’s Grant Park.  Our piece was finally installed permanently in Jerusalem.  I have worked with 2 other artists to create a time capsule mural on a cross-highway beam under Klyde Warren Park in 2010.  In 2014, I was awarded the first prize for the Tunnel Vision mural project.   Just recently, in 2017, I was awarded a character award for my “Catching Fish” mural, made for the 42 Murals Project.  A large collection of my works can be found in the rooms at The Omni Dallas Convention Center Hotel, as well as in public and private collections throughout the world.

You will find some of the products I make, as well as select Fine Art Prints for sale on my Etsy page.